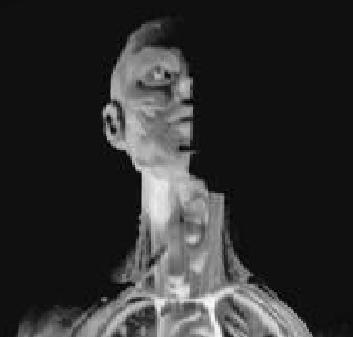 It's your philosophy teacher. You gulp. You have always found her rather intimidating. She always looks at you like she's angry with you, though you don't know why she would be angry. And when she smiles, it's so wide it looks like her face is going to split in two. Because she's behind you, you move forward, and wind up even closer to the anatomical model. It only has half a face. The other half is a skull with an empty eye socket. You'd thought there was a plastic eyeball in there earlier but evidently you saw that wrong. There's something off about it, but you aren't sure what. And maybe it's nothing at all, and you're just nervous about being alone in a room with your philosophy teacher.

"...I don't really have an opinion on it," you say. You really don't. It seems like a weird thing to think about for longer than a few seconds. Your teacher's wide grin doesn't waver.

"You know," she says, walking towards the model and touching it with her weirdly long fingers, "This is a really old anatomical model. Pre-war old. Do you know how you can recognize whether something was made in pre-war or post-war times?"

You shake your head. It just looks like a regular human being to you, except for the visible guts and the lack of skin. Your philosophy teacher gives you a moment to think but gives in when you don't answer. "It's the anatomy. Before the war this country was quite poor, you know? Though, you're probably too young to remember... Well, as I said, this place used to be very poor. But after the war we could finally invest in science again. And our scientists learned a lot of new things about the human body. So if we would make the same anatomical model now, it would be far more detailed."

"Oh," you say. That's actually kind of interesting, if you have to be honest, which you'd rather not be if you can help it.

"You know, people like you didn't really exist before the war," she says.